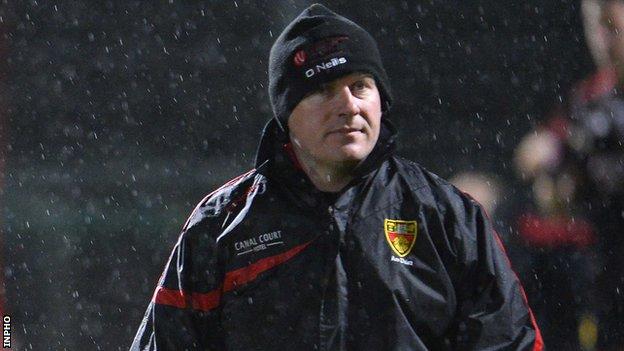 Down moved to the top of Division Two - at least until Sunday afternoon - as they hammered a hapless Louth side in the Football League clash at Newry.

Donal O'Hare managed 1-8 himself in the first period as Down led 1-11 to 0-2 at the interval on a wet night in Newry.

An awful night for Aidan O'Rourke's side was completed by substitute Brian White's late sending off after he had picked up his second yellow card.

After drawing their opener against Armagh and losing narrowly against Laois, Louth would have been expected to have been competitive at Pairc Esler.

However, they showed little appetite for the battle early on as two Niall Madine efforts and three O'Hare efforts had Down five points up by the 12th minute.

The one-way traffic continued as Madine unselfishly set up O'Hare's goal to put Down 1-7 to 0-0 ahead.

O'Hare added another point before Clarke replied with two frees for Louth.

Despite Clarke's two points, he was then withdrawn by O'Rourke as part of a double substitution which saw White and Derek Crilly being introduced.

The game was over as a contest by the interval as Down pushed their lead on to 1-11 to 0-2.

Not surprisingly, Down's performance did dip somewhat in the third quarter as Louth actually outscored the Mournemen 0-6 to 0-4 in a 20-minute period.

However, the introduction of Coulter saw Down lift their game again as he pilfered two goals, helped by good work by Jerome Johnston and the impressive playmaker Mark Poland.

Coulter then turned provider for Maginn's late goal after White's sending off.