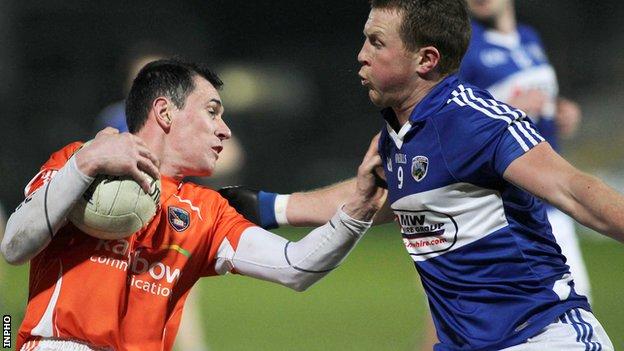 Armagh have moved up to third in Football League Division Two after an impressive 2-18 to 1-12 win over Laois.

The hosts surged six points clear at the Athletic Grounds before John O'Loughlin's goal for Laois, leaving Armagh 0-12 to 1-6 ahead at the break.

The Orchard men had the wind advantage in the first half but Laois made the brighter start, slotting over four points without reply after Campbell's opening score

Another five straight points gave Armagh a commanding six-point advantage before O'Loughlin tapped in on the stroke of half-time after keeper Philip McEvoy palmed out Padraig McMahon fierce shot.

Laois were wind-assisted in the second half but Armagh tagged on the opening two points through Caolon Rafferty and Kernan.

Laois substitute Gary Walsh struck the foot of a post from a tight angle before David Conway and Ross Munnelly fired over for the Leinster side.

Mark Shields saw his 53rd minute shot saved but Campbell followed up to stab into the Laois net.

The goal gave Armagh a seven-point lead before Laois were denied by the woodwork again with Paul Begley striking the crossbar.

Ethan Rafferty completed a flowing Armagh move with a clinical finish into the bottom corner.

"I'm delighted with the performance although the most important thing is putting together back-to-back wins," said Orchard boss Paul Grimley.

"We've been working in training on maintaining possession and how to deal with blanket defences, and it's beginning to show rewards.

"We are not thinking about promotion - we're building for the future and we never take our eyes off the next game."