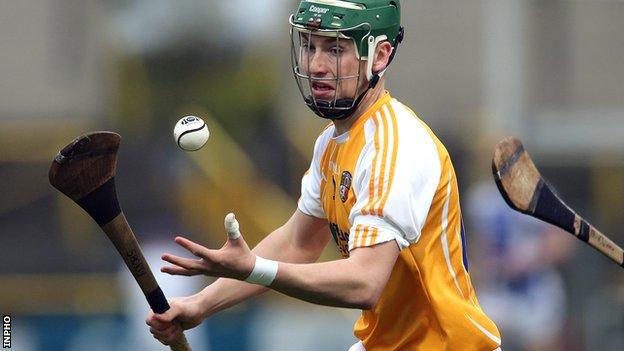 Laois hit 1-5 without reply in the second half to secure a Division 1B win over Antrim in Portlaoise.

The visitors made a good start but Laois took control and led 0-13 to 0-8 at the interval.

The Saffrons fired over the next six points only for Laois to dominant again and leave the Ulster side with three defeats from three games.

However, Laois firmly turned the game in their favour by half-time, with King (1-7), Charlie Dwyer, Tommy Fitzgerald and Matthew Whelan helping them to a five-point advantage at the break.

The visitors were sharp on the restart, with Shiels and Johnson continuing to punish Laois.

Their efforts saw Antrim take the lead for the first time since the third minute, after Johnson brought his tally to six points in the 47th minute to make it 0-14 to 0-13.

However, the Saffrons would be on the back-foot soon after, as Laois once again kicked into gear.

King tied the game for the fourth time with 20 minutes left, starting a dominant spell for the Leinster men.

Stephen Maher gave Laois the lead, before Foyle's goal and points from Willie Hyland, King and John Purcell opened up a seven-point gap.

Antrim rallied with a trio of points, but King fired home Laois's second goal five minutes from the end.