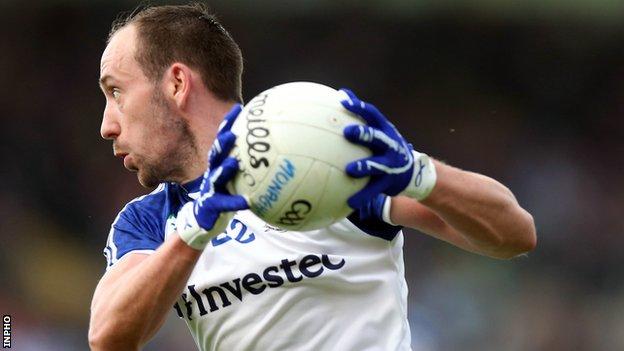 Monaghan kept themselves in the Division Two promotion hunt with an emphatic five-point success over struggling Louth in Clones.

The Ulster champions were dominant early on and a Gavin Doogan goal helped them race into a handy lead.

Just before half-time, Derek Malone tucked away the second goal after a quick free kick move and Monaghan led 2-8 to 0-6 at the break.

Louth had Dessie Finnegan sent-off early in the second half.

That just made the task more difficult for a Louth team which had been well beaten by Down last time out.

Monaghan's highly-rated prospect Jack McCarron had another good day, landing a couple of frees in the first half and a score from play in the second.

Conor McManus, so often the star performer for Monaghan, accounted for six of his team's points while Dessie Mone and Rory Beggan were also on target.

Monaghan's next match is away to Armagh.