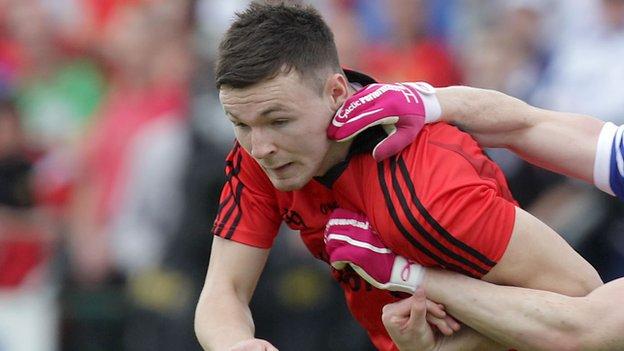 Down's promotion prospects were dealt a blow as they tasted defeat for the first time in the 2014 league in Sunday's match away to Galway.

James McCartan's men wasted a number of chances and were made to pay, with a Danny Cummins goal proving crucial as Galway claimed their first points.

Down were 0-6 to 0-5 down at half-time, with Donal O'Hare scoring all of their points, four from frees.

The Ulster county failed to score a single point in the closing 20 minutes.

Ryan Johnston had missed a great chance for Down when they were 0-8 to 0-10 behind. The substitute raced through but put his shot wide.

The crucial score came when Gary Sice set up Cummins who smashed the ball past keeper Brendan McVeigh and into the roof of the net.

The seven-point defeat leaves Down tied on five points with Armagh and Monaghan, two points behind Division Two leaders Donegal.