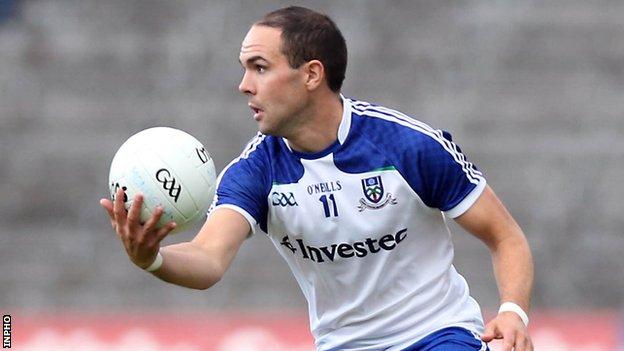 Kieran Duffy replaces Ryan Wylie at corner-back while the other change in personnel sees Paul Finlay taking over from Padraic Keenan.

Armagh make one change in personnel from their win over Laois with Rory Grugan replacing injured Kevin Dyas.

Findon moves from midfield to full-back with Mallon switching from the number three jersey to centre half-back and Rafferty named in midfield.

With Grugan named at right half-forward, Tony Kernan switches to the number 11 shirt.

Both Monaghan and Armagh go into Saturday's match on five points after four matches.

Donegal lead the Division on seven points but Monaghan, Armagh and Down are all in the promotion frame two points behind the leaders.

Armagh look capable of beating the Ulster Champions after impressively defeating Meath and Laois in their last two matches.

Monaghan comfortably accounted for Louth last time out after losing to Donegal a week earlier.

Down face Donegal at Pairc Esler on Sunday, with Donegal manager Jim McGuinness making just one change to the team which drew with Meath last weekend.

2012 Footballer of the Year Karl Lacey returns to the side, with Ryan McHugh dropping to the bench.

Lacey is likely to drop into the corner-back role, with Frank McGlynn playing in his preferred wing half-back role.