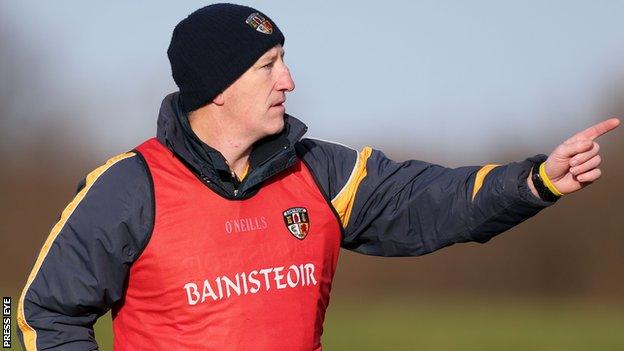 Antrim hurlers will feel they squandered a chance to take a major scalp as they were edged out by three points by Cork in the Hurling League Division 1B clash at Ballycastle.

Matthew Donnelly's goal in first-half injury-time helped them lead 1-9 to 0-8 at the break but the Saffrons had fired 11 wides in the opening period.

However, the performance should encourage Kevin Ryan's side.

Cork didn't lead the contest from the sixth until the 61st minute when Horgan chipped over a free.

Helped by the first-half wind advantage, Antrim led 0-6 to 0-3 after 20 minutes with Conor Carson, Barry McFall and Stephen McAfee among the scorers.

However, Antrim had already fired several bad wides and those misses were to come back to haunt them.

Ciaran Johnson's defensive work was a stand-out feature of Antrim's first-half display as the Rebels relied on Horgan's frees to keep them in touch.

Donnelly's goal came on the stroke of half-time as he slotted from close range after Cork keeper Darren McCarthy had batted down a long ball from Neil McManus.

Antrim keeper Chris O'Connell made a great save early in the second half to deny Horgan and the Saffrons still led by four points 10 minutes into the second half.

However, Horgan's frees and four points from Conor Lehane enabled Cork to whittle away at the Antrim advantage before they moved ahead in the 61st minute.

Cork could point to having a goal harshly ruled out when Brian Hartnett was adjudged to have over-carried.

However, the Saffrons ultimately paid for their scoring drying up in the final quarter.

They were still creating chances but not taking enough and Paul Shiels's point with five minutes remaining was their first score in 12 minutes.

As Cork held on to win, they received a further boost when news came through of Limerick's surprise draw with Offaly, which leaves Jimmy Barry-Murphy's side on their own at the top of Division 1B.

At this stage, Antrim look set to be involved in a relegation play-off against Offaly.

The bottom two teams in Division 1B will be involved in the play-off and while Offaly still have to face the Saffrons in their round-robin clash next weekend, they look likely to have to meet again in the relegation clash.