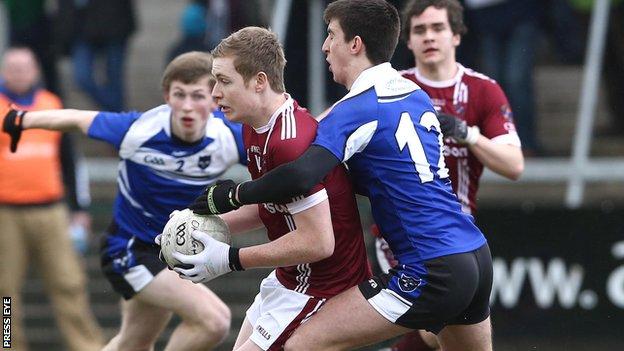 St Pat's Maghera have retained the MacRory Cup with a 1-12 to 1-8 win over Omagh CBS in the Armagh decider.

Conan McElduff smashed into the St Pat's net after 12 minutes to help Omagh to a 1-5 to 0-6 half-time lead.

St Pat's hit the opening five points of the second half to take control before Danny Tallon's goal on 44 minutes was allowed despite a double bounce.

Omagh had two goalbound shots blocked as the holders secured a 14th success in the competition.

Sean McGale put Omagh ahead after slotting over the first point in the St Patrick's Day showpiece at the Athletic Grounds.

Points from Jack Doherty, Conor Cassidy and Conor Convery edged St Pat's in front before McElduff netted with a classy turn and shot.

The Derry side drew level with Tallon tagging on a double, but Omagh went in two ahead at break thanks to Patrick McNeill and James Darcy scores.

St Pat's won the game in the opening 14 minutes of the second half, Convery hitting two of their five unanswered points.

There was controversy over Tallon's goal, with the forward bouncing the ball twice before his strike was cleared off the line and he showed composure to fire home at the second attempt.

From two points down at the break, St Pat's were now five clear and Omagh's hopes faded after goalmouth drama in the 53rd minute.

Substitute Peter Teague was first to see his shot blocked with the ball falling to McElduff, and his powerful effort was also kept out by a St Pat's body.

St Pat's saw out the remainder of the match with ease, with the Maghera lads deserved winners in their third consecutive final.