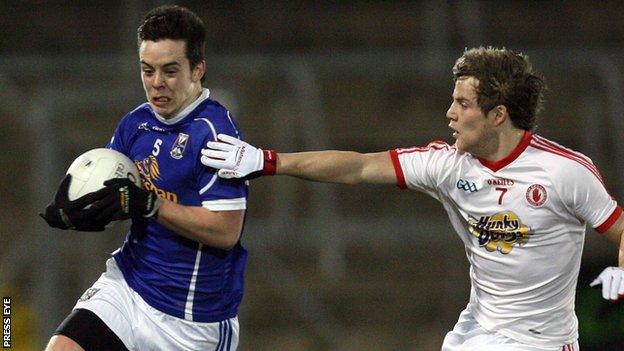 Ulster U21 champions Cavan defeated Tyrone 1-11 to 0-6 to set up a semi-final clash with Monaghan.

The teams were level at 0-3 apiece at Breffni Park before Cavan moved ahead on the restart thanks to two superb points from Michael Argue.

The Breffni team struck a major blow in the 46th minute when Enda Flanagan sent Joe Dillon in for a goal.

Cavan cruised to victory and they will now face Monaghan, who beat Down 1-12 to 2-7 at Inniskeen.

Christopher McKenna netted for Monaghan while the Down goals came from Michael Hughes and Ryan Johnston.

Tyrone nailed two points in the opening five minutes through Mark Bradley and Danny McNulty, but managed just one more in the remainder of the first half, despite the assistance of a strong breeze.

Cavan, playing a possession game, worked the ball patiently for Argue and Dara McVetty to bring them level in the 14th minute.

But Cavan went in level when Kevin Bouchier converted a stoppage time free.

Argue's brilliant points and the Dillon goal saw Cavan take control and they eased to the finish line with scores from Conor Madden, McVetty and Bouchier.