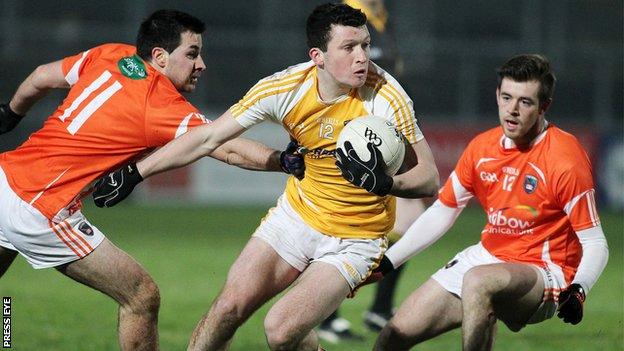 Antrim suffered an early blow when full-forward Ronan McGrady, their top-scorer in the first game, got a red card for an off-the-ball incident.

Armagh will now face Donegal in the semi-final in Omagh on Wednesday, 2 April.

The holders Cavan play Monaghan in the Athletic Grounds on the same night.

Antrim showed great character to battle on with 14 men for most of the game and the result was in doubt right up until the final whistle, Armagh goalkeeper David O'Hagan denying Patrick McBride an equalising goal in injury-time.

The sides were level three times in the first half before Armagh started to dominate in the second quarter, reeling off four points in a row to lead by three at the break.

Jemar Hall scored the first point from play in the game after 18 minutes and a '45' from the same player, as well as points from Blaine Malone and Ciaran O'Hanlon, saw a decent cushion open up for Armagh before half-time.

Armagh established a four-point lead in the first minute of the second half but Antrim showed the character which was the hallmark of their display last week and fought back with three points in a row.

Antrim goalkeeper Ronan Hanna kept his team in the game with three superb point-blank saves from Paul McGeown and Ciaran O'Hanlon in the second half.

Antrim got to within a point of Armagh at 0-10 to 0-9 after 48 minutes but two points from Paul McGeown gave Armagh a useful cushion to cling on to.