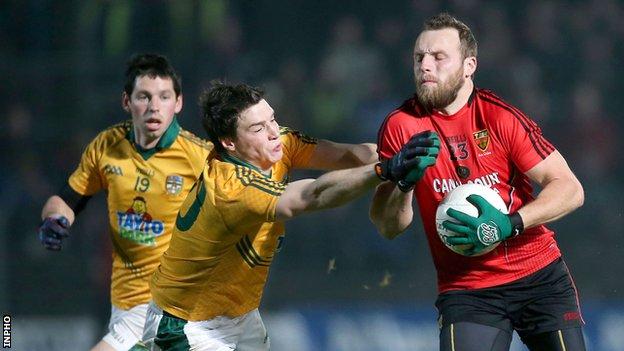 Down's Football League Division 2 promotion hopes suffered a blow as they were edged out by Meath at Navan.

The Mourne County led by three in the first half before Meath reduced the margin to 0-6 to 0-7 by the break.

A Graham Reilly goal put Meath into the lead but Ambrose Rogers immediately netted at the other end to move James McCartan's side ahead again.

However, Meath hit six of the last eight scores to snatch the win as Down paid for earlier missed chances.

Meath also missed some gilt-edged chances in the game and on the balance of play, probably just about deserved their victory.

The Royal County's win means they join leaders Donegal, Monaghan and Down on seven points in the tight Division 2 standings.

Down still retain promotion hopes but they will need to win against Laois next weekend, probably with plenty to spare, and hope that other results go their way.

Meath made the brighter start as Pairc Tailteann with Andrew Tormey and Stephen Bray both wasting promising openings when goals appeared on.

As Down were more clinical in the opening period, Donal O'Hare edged them ahead before they lost Conor Laverty to a black card after a clumsy high tackle.

Jerome Johnston replaced Laverty and he went on to perform well before his shooting deserted him in the second half.

Meath regrouped to lead 0-3 to 0-2 but Down hit five of the next six scores, with free-taker O'Hare notching four of them.

But crucially for the Royals, they notched the last two scores of the opening period to cut Down's lead to the minimum.

Down looked in a degree of control as points from Mark Poland and O'Hare extended their lead to three after the break although they also missed a goal chance as Johnston's weak finish was cleared off the line.

Meath suddenly were in the lead on 50 minutes as a superb pass from Damien Carroll set up Reilly to hammer to the net.

Down appeared to have regained control within a minute as midfielder Rogers, making his return after a long injury-absence, netted at the other end after his superb run and exchange of passes with O'Hare.

However, Down only managed two points in the remaining 20 minutes of play as Stephen Bray's impressive forward play helped Mick O'Dowd's side snatch the victory.

Down also suffered a second black card in the closing stages when Conor Garvey pulled down a Meath player.