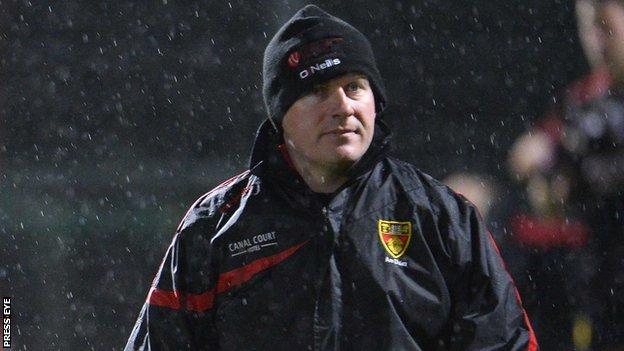 Down's Division 2 Football League campaign ended in disappointing fashion at they were beaten by Laois.

The win, which kept Laois in Division 2, was founded on their first-half display as they by nine at the break.

Laois led by four early on when Conor Maginn netted for Down but John O'Loughlin quickly responded with a goal for the home side.

Benny Coulter made his first start of the League as he was a late selection in place of Kevin McKernan but the Mayobridge man and his attacking colleagues saw very little of the ball in the first half.

But Laois responded with an unanswered 1-3 which include O'Loughlin's goal after good work by the impressive Munnelly.

Donal O'Hare notched Down's only first-half point in the 19th minute but Laois countered with three more points before the interval.

Down could only improve after the break and they did outscore the home team in the third quarter with Paul Devlin and Niall Madine among the scorers.

Booth's red card for his challenge on Paul Devlin, as the Down man was about to pull the trigger, led to the penalty which was confidently netted by Carr.

As Down chipped away at the Laois advantage, there was only a kick of the ball between the teams in injury-time but Tomas O Flatharta's side held on for a victory which they deserved to retain their Division 2 status and send Armagh spinning into Division 3.