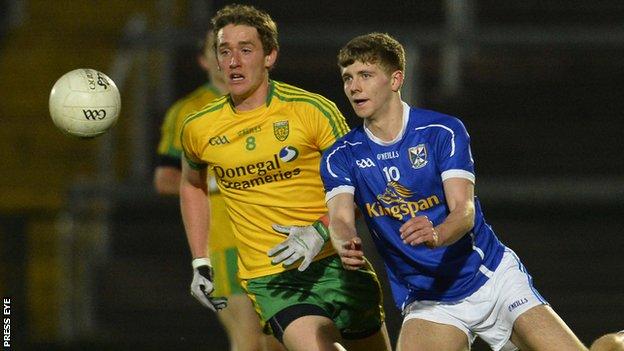 Cavan U21s won their fourth straight Ulster title as they hit 1-3 in the final four minutes of action to beat Donegal 2-6 to 0-8 at Armagh.

Donegal led by two points with a minute of normal time left but Liam Buchanan's goal put Cavan ahead and the Breffni side then added three further points.

Points from Kilcar cousins Ryan and Eoin McHugh had put Donegal ahead for the first time with five minutes left.

But Buchanan's goal turned the contest in Cavan's favour again.

Swarm defences were on top in a low-scoring first half, with Cavan leading 1-2 to 0-2 at the break.

Cavan danger man Dillon was frequently got bottled up by his two Donegal markers - until he eluded them once in the 18th minute and stuck the ball in the back of the net.

Donegal forward Willie Gillespie scored the only point from play in a dour first half in the 20th minute, with Cavan hitting seven wides in the opening period.

Cavan captain Conor Moynagh received a black card from the referee, on the advice of an assistant referee, after an off-the-ball incident with Eoin McHugh in the 22nd minute.

Donegal hung on and only trailed by a point, at 1-3 to 0-5, after 44 minutes, although they also kicked four wides in the third quarter.

Patrick McBrearty scored his first point from play with a curling left-footed shot to level the scores with ten minutes remaining.

Cavan were chasing the game as the second half wore on with Donegal dominating possession.

Ryan McHugh's long-range point put Donegal ahead for the first time in the game with five minutes remaining.

His cousin Eoin McHugh stretched Donegal's lead to two points but Cavan's midfielders snatched victory with Liam Buchanan breaking two tackles to drill the ball low into the net in the 59th minute.

Argue followed it up with the insurance point, with Dillon (free) and Fortune piling on late points, as Cavan's domination of the Ulster U21 provincial stretched to a fourth year.