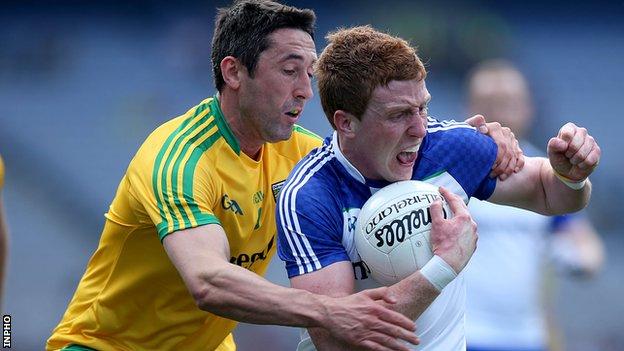 Monaghan won the Football League Division Two title as they easily accounted for a jaded Donegal.

Donegal led 0-3 to 0-2 but Monaghan hit five straight points to take control and were 0-10 to 0-5 ahead before their lead was trimmed to three by half-time.

Whether the rigours of Donegal's recent well-publicised training camp in Portugal was still in his players's legs, Jim McGuinness will still surely be concerned with Sunday's largely insipid display by his team.

With his team struggling from an early change, he was forced to bring off midfielder Martin McElhinney and Christy Toye after only 25 minutes and 2012 stars such as Karl Lacey, Frank McGlynn and Colm McFadden were among several Donegal players who appeared off the pace.

In contrast, Monaghan showed pace and power in the contest as they dominated the game bar a brief period in the third quarter.

Half-back Dessie Mone was deservedly named man of the match but the likes of Kieran Hughes and Darren Hughes can't have been far behind him with several of Monaghan's young contingent also impressing.

Paddy McBrearty and McFadden hit the opening scores for Donegal but after leading 0-3 to 0-2, they never held the advantage again for the remainder of the contest.

Darren Hughes and Paul Finlay stroked over superb long-range frees to put Monaghan ahead with further scores from Ciaran McManus, the excellent Paudie McKenna and Mone extended the Farney advantage to four.

Two Murphy points did cut Monaghan's lead to two but the 2013 Ulster champions then forged a double-scores lead after further efforts from play from McKenna, Kieran Hughes and Finlay.

Murphy and McFadden frees did give the half-time score a flattering look for Donegal as they trained 0-7 to 0-10 at the break.

After Eoin Lennon was forced off after appearing to be accidentally caught on the ankle by Neil Gallagher, Monaghan did lose their way for a period with Kavanagh's deserved straight red card also appearing to galvanise Donegal.

Kavanagh's football boot had come off after a tangle with Darren Hughes and after picking up his footwear, he then stupidly prodded it into the groin region of the Monaghan man.

The feeling that the match might be changing course gained some currency when Murphy's penalty levelled the contest on 54 minutes.

Colin Walshe's challenge on substitute Ryan McHugh - which did result in a black card - had clearly been outside the large parallelogram but the referee ruled otherwise and Murphy stuck the spot-kick high into the right corner of the net.

But within three minutes Monaghan were back in control again after a superb McManus score from a tight angle was set up by Kieran Hughes's palmed goal after great work by Kieran Duffy.

As Donegal morale dipped, Monaghan outscored the 2012 All-Ireland kingpins 0-4 to 0-1 in the remainder of the contest to complete a comprehensive victory as they repeated last year's Ulster Final win.