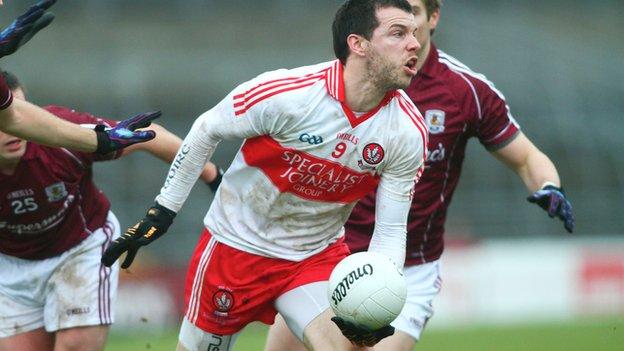 Derry midfielder PJ McCloskey is set to miss the Ulster SFC campaign because of his longer than expected recovery from a serious knee injury.

The Banagher player tore a cruciate knee ligament against Down last July and it was hoped he would return to action in March.

However, he required further surgery and his comeback has been delayed.

Meanwhile, forward Danny Heavron will miss the Ulster opener against Donegal on 25 May due to an ankle injury.

Haevron sustained the injury while playing in a club game for Magherafelt.

"In terms of Ulster Championship, or playing with Derry, I think I'll be lucky to play much this year," McCloskey told the Irish News.

"Once I get the knee able again and get fit again, I have to get back into form and there's all sorts of things I have to do."