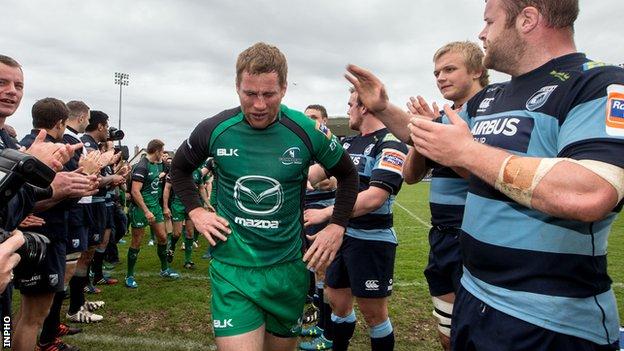 Duffy, who retired from rugby earlier this month, played for the Mayo under-18 team in the 1999 All-Ireland Minor final before committing to rugby.

The Mayo native won 10 Ireland caps between 2004 and 2009 during his spells at Harlequins and Connacht.

Duffy, 32, joined Mayo training on Tuesday and he is now effectively on trial with the squad.

Mayo are one of the top county teams in gaelic football but they have not won the All-Ireland title since 1951.

James Horan's Mayo side were beaten by Donegal in the 2012 All-Ireland Final and they suffered another heartbreaking one-point defeat by Dublin in last year's decider.

Horan believes that former Connacht captain Duffy will bring "great leadership and a presence to the squad".

"Gavin Duffy was invited down to join up with the squad for a couple of weeks where the management will have a look at him to see where he is at," added the Mayo boss.

During his rugby career, Duffy said on a number of occasions about how he would love to line out for his native county's gaelic football team.

A Mayo GAA board statement said that the county was "delighted to see a playing of the calibre of Gavin Duffy" linking up with the squad.

"Hopefully, he will remain a permanent presence in the Mayo senior football team set-up," added the Mayo board statement.

Duffy played for English Premiership club Harlequins between 2003 and 2006 and spent the last eight seasons with Connacht before retiring earlier this month.