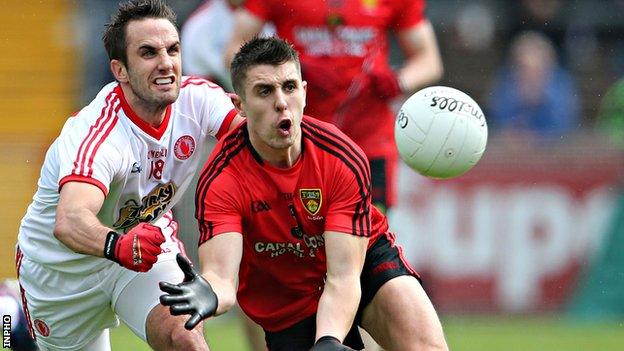 Two frees in stoppage-time by skipper Sean Cavanagh saved Tyrone from a shock defeat in Sunday's Ulster Championship match against Down at Healy Park.

Tyrone had been seven points up in the second half, but goals by Donal O'Hare and Conor Maginn brought Down right into it.

Down could have gone three up late on, but O'Hare missed a free and that meant Cavanagh's efforts forced the replay.

The teams will now meet again at Esler Park in Newry on Saturday, 24 May.

Down, who have not won an Ulster title for 20 years, will feel they let a glorious chance slip through their fingers.

But it was still a display which will boost boss James McCartan as the Mourne men were definite underdogs going into this one.

Tyrone keeper Niall Morgan was black-carded early in the second half as was Down's Conor Maginn late in the game.

Tyrone, who won the last of their 13 Ulster titles in 2010, looked in command during a disappointing first half.

A free by goalkeeper Morgan got them off the mark with skipper Cavanagh quickly adding a point from play.

Down managed just one score from play through Ambrose Rodgers, their other two points coming from O'Hare frees.

Tyrone led 1-5 to 0-3 at the interval, the goal coming from Peter Harte's emphatically-struck penalty.

It was awarded when Mark Donnelly was hauled down by Maginn who somehow managed to escape the newly-introduced black card which was intended to punish cynical play.

Down hit back with a penalty if their own, Aidan Carr blasting in after Morgan's black card foul on sub Jerome Johnston.

Kyle Coney, Cavanagh and McCurry added to the Tyrone tally and when Edendork forward McCurry scored his side's second goal in the 54th minute it looked all over.

Mickey Harte's men were 2-9 to 1-5 up and seemingly on course for a quarter-final contest against holders Monaghan.

But O'Hare found the net with a sweet right-foot strike and then Maginn's goal meant it was suddenly 2-9 to 3-5.

Conor Laverty levelled the game and skipper Mark Poland edged Down ahead with 10 minutes on the clock.

With Benny Coulter, a half-time sub, tagged on another point, it was Down's fifth score without reply.

It looked like Down were going to pull it off and, if O'Hare had been accurate with a free, they surely would have done.

But he missed, and Down were made to pay as Cavanagh coolly dispatched his two kicks in time added on.