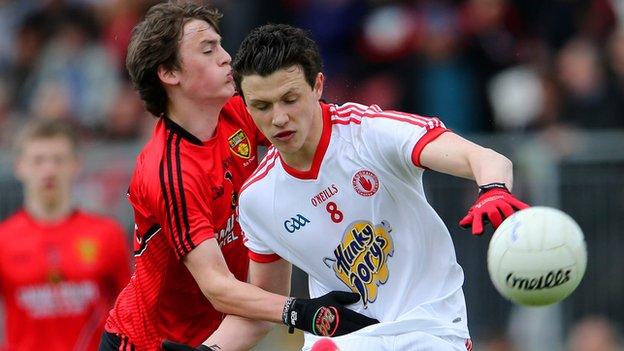 Tyrone had little difficulty in clearing the first hurdle as they cruised to a 1-18 to 2-6 win over Down in the Ulster Minor Championship.

However, the Red Hands have injury concerns over key attacker Conor McKenna and Lee Brennan ahead of next Sunday's clash with holsders Monaghan

Wind-assisted Tyrone were almost totally dominant in the first half with Fintan McClure scoring their goal.

Down's goals were scored by Tiarnan Rushe and Stephen McConville.

Rushe converted a penalty while sub McConville pounced late in the game.

Ryan Treanor and Frank Aiken pulled back Down points, but with Ronan Nugent and Macauley Quinn dominant at midfield, the Red Hands continued to attack in waves.

Brennan brought his tally to four, and McAnenly struck an excellent second, and in the 30th minute, they struck for a goal.

Nugent's attempt for a point came back off a post, and the alert McClure gathered the rebound to net from close range.

Down pulled back a goal from a Rushe penalty at the end of the third quarter.

Tyrone allowed the intensity to slip, and went 13 minutes without a score until midfielder Quinn landed his second point.

Down plundered a second goal in stoppage time when substitute Stephen McConville netted, after Treanor's shot had come back off a post.