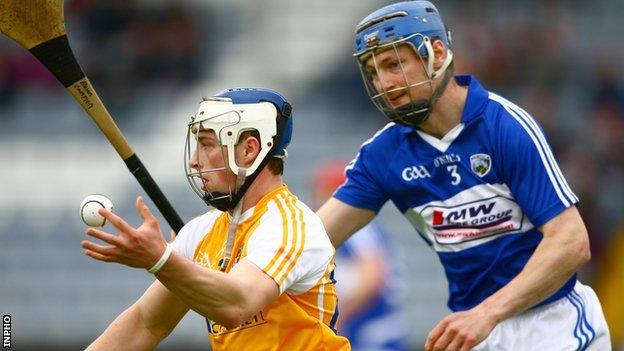 Antrim produced an impressive display to beat Laois by two points at Portlaoise and set up a Leinster SHC quarter-final against Wexford.

Kevin Ryan's side struggled in the opening half and trailed by 0-12 to 0-8 at half-time, with all bar two of their first half scores coming from frees.

Antrim scored six unanswered points inside nine minutes of the re-start and led by three entering the last quarter.

A fine Chrissy O'Connell penalty save provided the platform for the Saffrons.

The in-form Paul Shiels was prolific for Antrim in the first half and ended with a tally of eight points, all from frees.

All of Antrim's other scores came from play, three apiece from PJ O'Connell and Conor McCann, and two each from Arron Griffin and Conor Johnston.

Willie Hyland and Maher registered five points each for the hosts in the opening half, but Seamus Plunkett's side were on the backfoot on the restart.

Clarke, Johnston, Shiels, McCann, Carson and PJ O'Connell were on target for the visitors as they started the second half well.

Although Laois worked hard, Chrissy O'Connell denied Eoin Reilly in the 53rd minute with his penalty save and Antrim held on to win.

The Ulster county have now beaten Offaly, Westmeath, Carlow and London on their way to finishing top of their round-robin group.