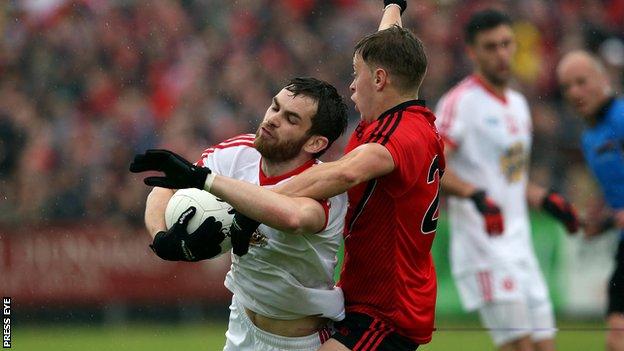 Tyrone made no mistake at the second time of asking as they clinically saw off Down in the Ulster Football Championship replay at Pairc Esler.

Niall Morgan saved an early Aidan Carr penalty as Tyrone moved 0-4 to 0-1 ahead and a Ciaran McGinley goal then extended the lead to 1-5 to 0-3.

Tyrone's lead was cut to only two by half-time but McGinley's second goal straight after the break stunned Down.

A harsh penalty was netted by Peter Harte as Tyrone remained in control.

Both teams had come away from last Sunday's drawn clash believing that they should have won but there was that suspicion that Down had blown their big chance after coming from seven points in arrears to lead by two as the match entered injury-time.

Ultimately, that was the case as Tyrone showed no mercy a week on after once again taking control of the contest in the first half.

Down will look back on their early missed penalty as Morgan stood his ground to easily save Carr's down-the-middle effort.

Conor Laverty did nudge Down ahead but Tyrone were controlling open play as Ronan O'Neill, Darren McCurry, keeper Morgan and the impressive Harte notched unanswered points.

Indeed at that stage, Tyrone could have been even further ahead as they fired a number of early wides.

Two Donal O'Hare frees cut Tyrone's lead to 0-5 to 0-3 but Down were five in arrears on 22 minutes as McGinley poked home from close range as the Mourne defence had failed to deal with an early ball from Sean Cavanagh.

A further Morgan place-kicked extended Tyrone's advantage to six but Down fought back to enjoy their best period of the match before half-time as they struck four unanswered points.

Gordon was starting to make an impression at midfield and he was on the scoresheet during that spell of Down dominance with Laverty, Conor Maginn and O'Hare also on target from play.

But perhaps the interval came at the right time for Tyrone as they regrouped and effectively put the match out of Down's reach within four minutes of the restart as McGinley notched 1-1.

McGinley was left completely unchallenged as he hammered in his second goal after being set up by half-time substitute Stephen O'Neill.

Another point from the goalscorer and a further Morgan '45 increased Tyrone's lead to seven by the 42nd minute as James McCartan finally was left with no option but to send on Coulter.

The Mayobridge veteran did notch an immediate point and another O'Hare effort cut Tyrone's lead to five by the 47th minute.

However, any prospect of another Down fightback was ended when Harte netted Tyrone's third goal from a penalty five minutes later.

It looked a harsh decision by Meath referee Cormac Reilly as Kevin McKernan was adjudged to have fouled Ronan McNabb after substitute Niall McKenna had squared across the parallelogram.

To their credit, Down kept battling and Jerome Johnston was unlucky to see a goal attempt come back off the inside of a post, with Morgan beaten.

But the game was effectively over with 15 minutes left as Down never really threatened to summon up the kind of comeback that they had produced at Healy Park.