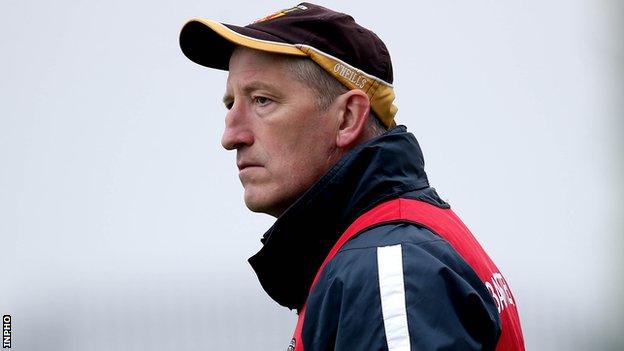 Antrim hurling boss Kevin Ryan continues to remain steadfastly against the new Leinster SHC format despite his team's progress in the competition.

The Saffrons impressively beat Laois on Sunday to complete a run of four straight wins in the qualifying series.

Antrim face Wexford in the quarter-finals at Portlaoise on Sunday but Ryan remains unhappy with the format.

"There are a lot of tired bodies. I think it's a disgrace being honest," Ryan told RTE Sport.

"It doesn't really give you a chance to prepare for a Leinster quarter-final.

"The only thing we have is momentum in that we've got through some battles and tried to train through it.

"We would have been training hard enough over the last three games and tried to freshen up for Laois.

"We are lucky we haven't picked up any serious injuries but you have a lot of knocks and bodies trying to recover."

Sunday's game will be Antrim's fifth game in six weeks and overall, Ryan believes the new structure is doing little to improve the standard of hurling in developing counties.

"The round-robin is designed to get teams out of Liam McCarthy which they are doing a team each year over the next two years.

"That's all it is designed for. Ask any of the counties involved if they want to play that. Absolutely not.

"There is Carlow out of championship hurling in the middle of May. How in any manner of means is that doing good for promoting hurling in Carlow? I think it's disgraceful."

Paul Shiels, PJ O'Connell and Conor Johnson were all late inclusions in the Antrim side on Sunday and Ryan is unlikely to tinker significantly with the side for this weekend's contest.