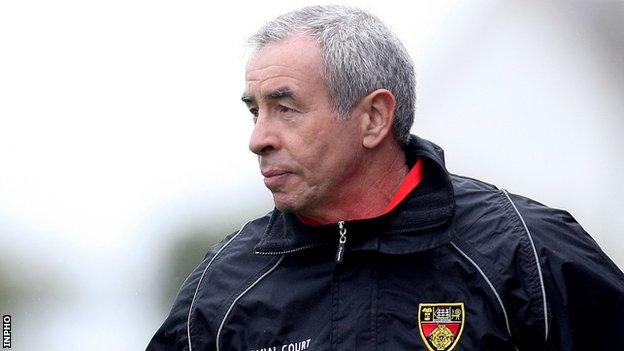 The Cullens have been named in the full-back line while another debutant is Paul McCusker who joins his brother Declan in the side.

Midfielder Richard O'Callaghan will make his first championship start while Barry Owens is named at full-forward.

Sean Quigley starts at corner-forward after recently returning to the squad.

The season started with three Quigley brothers in the squad with Sean joined by Seamus and Conor.

All three quit the panel in mid-March after Seamus had a training ground row with manager McGrath but Sean was returned to the panel earlier this month.

Goalkeeper Patrick Flood makes his championship debut in the absence of Chris Kerr, who has quit the squad.

Brothers Michael, Paul and Tomas McCann are named by manager Liam Bradley but Tony Scullion is on the bench.

Paddy Cunningham and Sean McVeigh are not included while CJ McGourty and Michael Pollock are missing having left the squad.

Kerr, McGourty and Pollock left the squad six weeks ago and it had been thought that Kerr's absence may open the door to Aldergrove teenager Ronan Hanna.

Kevin Niblock starts after his brief soccer stint with Cliftonville, while Michael and Tomas McCann return to the fold after falling out with previous manager Frank Dawson.

Antrim's performances in Division Four of the Football League were disappointing, leaving Fermanagh as probable favourites for the Brewster Park tie.