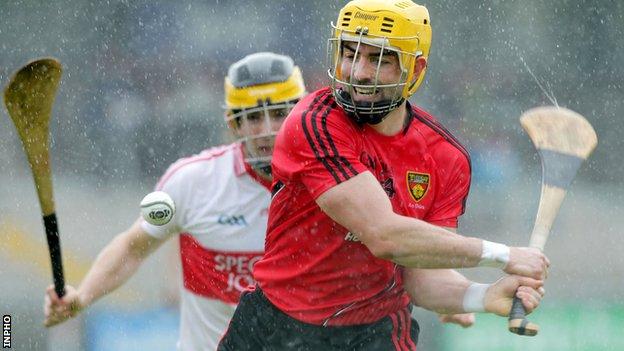 They also scored an unanswered 1-8 in the final 15 minutes of a poor match which condemns Armagh to the drop down to the Nicky Rackard Cup in 2015.

Down face the winners of the Nicky Rackard Cup final to decide who plays in the Christy Ring Cup next year.

Tyrone take on Fingal in the Nicky Rackard decider next week.

Down full-forward Johnny McCusker scored two goals in the opening 13 minutes to give the home side an early cushion.

Declan Coulter, who top-scored for Armagh with seven points, got their first score in the ninth minute from a '65' by which stage they already trailed by 1-2.

Former Down player Eoin McGuinness scrambled home a scruffy goal for Armagh on 45 minutes and five minutes later John Corvan drilled a fine strike past Stephen Keith for the visitors' second major of the game.

Down responded by scoring 1-8 without reply in the last quarter, substitute Malachy Magee's shot across goal giving the Mourne hurlers their fifth goal.