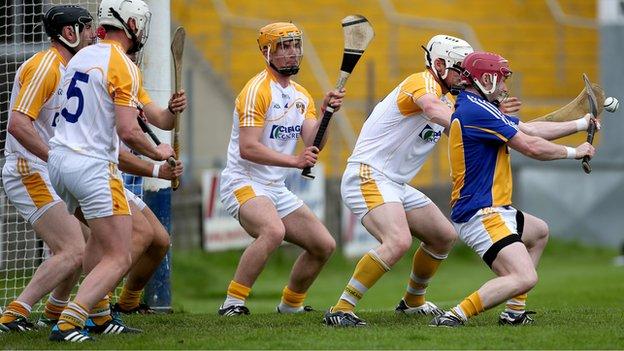 Antrim's hurlers paid for a nightmare start as they lost 5-19 to 0-21 to Wexford in the Leinster Championship quarter-final in Portlaoise.

The Saffrons were left reeling as Rory Jacob scored twice for Wexford in the opening four minutes.

Conor McDonald added a third goal to leave Antrim nine down at half-time.

Further goals by McDonald and Liam Og McGovern put the game out of reach of Antrim who then had Eoin Campbell sent off for a high challenge.

It means Wexford now face Dublin in the semi-finals while Antrim must regroup for the qualifiers.

Sunday's last-eight clash at O'Moore Park was Antrim's fifth game in six weeks as they had come through unbeaten in the round-robin qualifying series.

Having won five matches in a row, confidence was high in the Saffrons camp but it took them costly time to adapt to the big step up in class against Wexford.

Antrim keeper Chris O'Connell found himself picking the sliotar out of his net twice before four minutes had been played.

The first came when Keith Rossiter's long ball out of defence caught the Antrim defence sleeping and Jacob got in for a tap-in goal.

Podge Doran added a point for the hosts with Conor Johnston getting Antrim off the mark.

But Jacob then pounced for his second goal, following up after O'Connell had done well to save a shot.

Jack Guiney went for a goal from a free and O'Connell saved well only for McDonald to beat the Saffrons defence from the loose puck.

McDonald, Guiney and Paul Morris pointed to pile on the agony.

However, Antrim did respond well and Neil McManus, restored to an attacking role, scored three points - and Shields two - to leave it 3-9 to 0-10 at the interval.

Antrim made a good start to the second half with Shields tagging on another free and PJ O'Connell pointing when a goal might have been on.

But they never really managed to eat into the Wexford lead and it was effectively game over when McDonald caught a high ball and netted in the 48th minute.

McGovern got the fifth goal with 13 to go and, although sub Darren Hamill notched a couple of decent scores, Antrim suffered another blow when Campbell received a straight red for a high challenge on Rossiter.

Meanwhile, in the Munster Championship semi-finals, holders Limerick claimed a 2-18 to 2-16 win Tipperary at Semple Stadium.