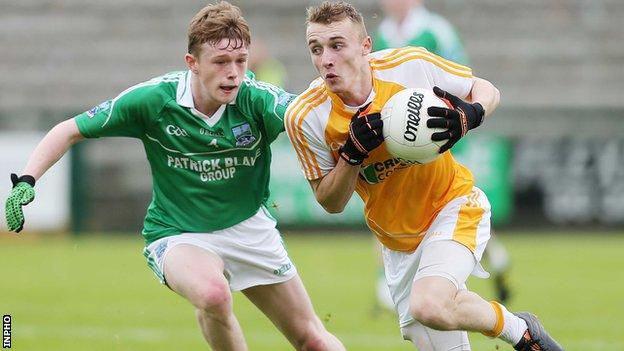 Antrim progressed to the semi-finals of the Ulster MFC with a five-goal rout of Fermanagh in Brewster Park.

Conor Small hit the net twice in the first half with captain Ruairi Scott also scoring a goal before half time.

The visitors led by 3-5 to 0-2 at the break, with Shane Rooney scoring Fermanagh's only point from play.

The Saffrons will play Donegal in the Ulster minor semi-final on June 22.

Antrim scored three goals in a ten-point win over Fermanagh in the Ulster minor league earlier this year, and this time they found the net three times before half time.

Centre half-forward Small scored the opening with a neat finish across goalkeeper Colin Copeland, with Fermanagh defender Cian McManus black-carded for a foul earlier in the move.

His interception in midfield set up Small for his second goal after 28 minutes.

Scott passed to Odhran Eastwood, whose unselfish pass across made it easy for Small to palm the ball to the net.

Scott then scored the third goal himself, shooting across Copeland and burying the ball into the far corner.

The Erne netminder also made a superb save from Seamus McGarry while at the other end Rooney was unlucky with a shot that crashed off the upright.

James McAuley toe-poked in Antrim's fourth goal on 34 minutes, but was injured in the process and had to be substituted.

Fermanagh hit 1-2 in a three-minute spell with Liam Maguire scoring at the far post, but Scott steadied the ship for Antrim with a point.