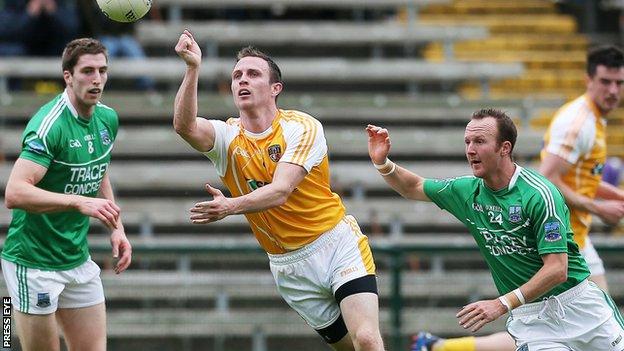 Antrim survived a late scare to beat Fermanagh 2-18 to 3-13 and go through to face Donegal in the semi-finals of the Ulster Football Championship.

Liam Bradley's Saffrons were in command in the early stages and led 1-10 to 0-1 with Brian Neeson getting the goal.

Fermanagh fought back with Sean Quigley netting a goal but Antrim responded and a Kevin Niblock goal eased them into a huge 2-17 to 1-9 lead.

Barry Owens and Marty O'Brien got late goals for Fermanagh.

O'Brien's effort left it a two-point game and Fermanagh almost snatched an incredible victory but were denied when Kevin O'Boyle cleared off the line in stoppage-time.

That was the last chance for Pete McGrath's Erne side and their spirited revival just fell short.

Antrim boss Bradley said they should have won by a much greater margin.

"We made two basic mistakes which let Fermanagh back," he said.

"If you take those out, we ripped that team apart and a 15-point victory would not have flattered us.

"I don't care what division we are in, on any given day we are capable of winning in Ulster because we have some great forwards."

There were two black cards issued at Brewster Park - Conor Murray of Fermanagh in the 18th minute and Antrim's James Laverty early in the second half.

Antrim will face Donegal in the semi-finals on 22 June, well aware they will have to defend better than they did in Enniskillen.

The exciting finish looked a most unlikely scenario when Antrim charged into that 12-point lead.

But Quigley's route one goal, plus by points from Eoin Donnelly, Paul McCusker and Paul Walsh, meant Fermanagh were just 1-10 to 1-5 down at the break.

However, Kevin Niblock pounced for Antrim's second goal that sparked a fine run for the visitors.

Ryan Murray, Tomas McCann, Niblock and Neeson were all on target as Antrim built up an 11-point cushion at 2-17 to 1-9.

Two Quigley frees added to Fermanagh's tally but single points were never going to be enough.

The goal they needed came when Antrim lost possession to Quigley and he fed former All Star Barry Owens who scored, making it 2-17 to 2-11.

Quigley then added another free, Neeson responded with a point for Antrim, and O'Brien scored for Fermanagh to leave five between the sides.

O'Brien then struck another goal to cut the gap to two and Fermanagh would have won it but for O'Boyle's last-gasp goal-line clearance.