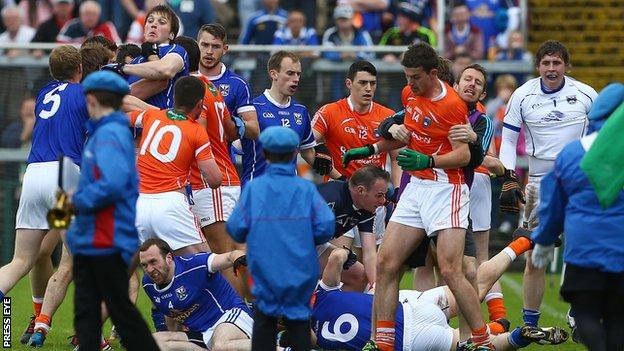 Sunday's Ulster Football game between Armagh and Cavan began amid ugly scenes as a brawl broke out involving the majority of the players before the match had even started.

The fighting broke out as the players were about to line out for the pre-match parade at the Athletic Grounds.

Punches were thrown during the violence and young members of the band providing the music were forced to run for cover.

Despite the scenes, no players were sent off by referee Marty Duffy.

However, the GAA looks certain to launch an investigation into the scenes which came before a game won by Armagh on a 1-12 to 0-9 scoreline.

BBC Radio Ulster GAA analyst Oisin McConville said that it appeared that the fighting had started after the Armagh team lined out behind the Cavan flag as the parade was about to begin.

Cavan player Martin Dunne appeared to be injured during the fighting and was unable to take his place out on the pitch as the game eventually started some six minutes late.

Dunne was later spotted in the dugout watching the match with his arm in a sling and manager Terry Hyland said after the game that the player suffered a suspected broken hand in the melee.

With the brawl guaranteed to result in negative headlines for the GAA, it will be a huge shock if an investigation isn't launched.

An Ulster Council statement said that the GAA's Central Competitions Control Committee will "view the referee's report and any action will arise from the findings".

GAA president-elect Aogan O Fearghail described the scenes as "unsightly....and not something I would welcome at all".

However, Armagh manager Paul Grimley claimed the incidents were "nothing really serious" and denied that his players had "crossed a line".

"Whenever you get 15 boys hyped up and they are training so hard and the tempo and the aggro is there, the adrenaline is flowing, you are going to get wee tiffs like that. But that's all it was," Grimley told BBC Sport Northern Ireland.

Asked about the possibility that suspensions could be imposed on his squad following Sunday's pre-match incidents, Grimley replied:"We'll have to wait and see what happens but from what I saw, there were 30 players involved in it. Are they going to suspend them all?

"I wouldn't make a bigger thing than it actually is. It was dusted off off. That was it."

Grimley said he was "unaware" of the suggestion that the brawl had started after Armagh stood behind the Cavan flag during the pre-match parade.

"If that did happen, it was a genuine mistake," added the Armagh manager.

Cavan manager Hyland said that the brawl was an example of players "disrespecting the jersey".

"I can't condone it from either side. It shouldn't happen," added Hyland.

"You are playing in front of a crowd of 13,000 or 15,000 people and when you pull on your jersey, you are supposed to respect it and you have to carry that respect out on to the field.

"I do believe that it started from [Armagh] players not standing behind their own flags. Maybe players don't recognise their own colours any more."