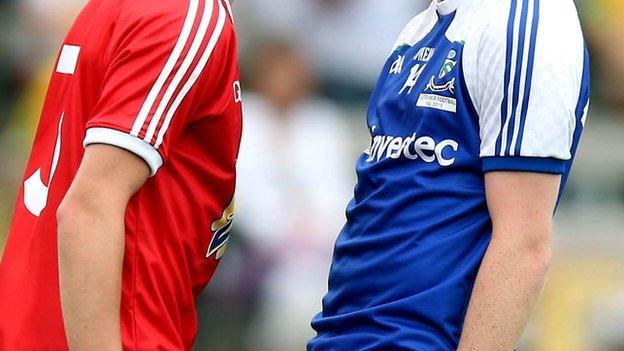 Ulster Minor football champions Monaghan made a winning start to the defence of their title by edging out Tyrone in a repeat of the 2013 final.

Two goals from David Garland and one from Francis Maguire helped the holders to a 3-6 to 0-5 lead at the interval.

The scores eventually began to flow for Tyrone, Cormac O'Hagan narrowing the gap to two with a free and a Padraig McGirr score reducing it to one.

The Farney lads ultimately survived the late fightback by the Red Hands to book a place in the next round.

Monaghan displayed all the hunger in the opening half, their sweeper system working a treat as they broke at pace and exposed huge gaps in the Tyrone defence.

Francis Maguire sprinted through the middle to drill home their first goal after 11 minutes, and David McAllister landed a couple of superb points.

David Garland scored two similar goals, punching home from close range after McAllister had crossed from the left to the far post.

Tyrone had scores from Conor McKenna, Lee Brennan and Fintan McClure, but they were repeatedly thwarted by a solid and well organised Farney defence.

The Red Hands cut the deficit with points from Brennan and McKenna, but the Farney lads had heroic defenders in Mustafa Gamal, Barry Kerr and Caolan McElwain.

McKenna switched to full forward, and the scores finally began to flow for Tyrone, with Enda McGarrity, Brennan, Conan McKenna and McKenna all on target.

The match had originally been scheduled for Saturday, 24 May, but was postponed following the sudden death of Owen Bannigan, the father of Monaghan player Michael Bannigan.