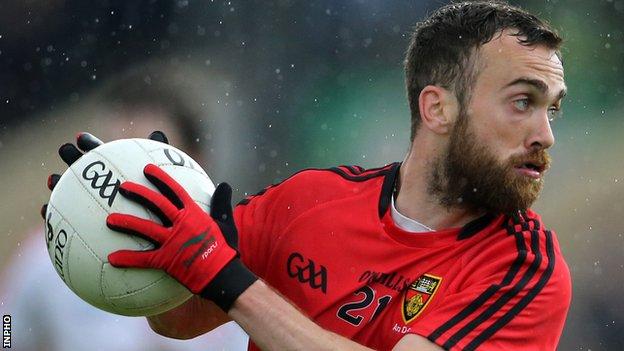 Down are into the second round of the All-Ireland qualifiers thanks to an easy 4-18 to 0-9 victory over Leitrim in a one-sided match in Newry.

Conor Laverty and Niall Madine scored goals as the Mourne men established a 2-10 to 0-4 interval advantage.

Down, in the qualifiers after losing in a replay to Tyrone, kept the scores ticking over in the second period.

Laverty got his second and substitute Damian Turley netted the fourth as Down won by 21 points.

Down will discover their second round opponents when the draw is made on Monday morning. The possibilities are Kildare, Clare, Roscommon or the winners of the Armagh v Monaghan Ulster semi-final replay.

Whoever they get, James McCartan's men are certain to face a tougher challenge than they met in this game.

"It was a no-win situation for us really," said McCartan.

"If we didn't really win by a lot of points we would be criticised, and if we did we would not get the credit. That is the way it is.

"This game gave us the chance to get some players back and give them some game time to try to create more competition in the panel."

Leitrim got the first point through a free by their sharpshooter Emlyn Mulligan - but that was to be the only time the Connacht outsiders were in front.

Half-forward Mulligan registered again for the visitors but Laverty pointed another for Down who then got their first goal.

Skipper Mark Poland tried to fist over but the ball struck a post and Conor Laverty pounced and will claim the goal even though it came off a Leitrim man last.

Poland turned on to his left foot to get on the scoresheet and O'Hare added another point from a tight angle to put McCartan's men 1-6 to 0-2 ahead on 18 minutes.

Down then scored their second goal and it looked like the first-round qualifier was over as a contest.

Niall Madine got the three-pointer, punishing a blunder by corner-forward Kevin Conlan who dropped an easy catch.

Conor Maginn, O'Hare, Benny Coulter and stand-in keeper Michael Cunningham - with a 45 - added points for Down while Sean McWenney got Leitrim's first point from play and Robbie Lowe pointed when his goalbound effort was turned over by Cunningham.

In the second half, Down's O'Hare, Laverty, Benny Coulter, Kevin McKernan and Liam Doyle added points while Laverty got his second goal and Damian Turley netted the fourth.

It was a good passing move which ended with Laverty netting, and the game was long decided when substitute Turley took a pass from McKernan to find the net.