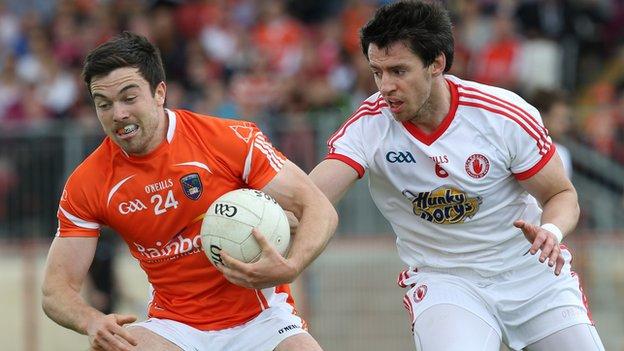 Tyrone crashed out of the All-Ireland Championship as Armagh won Sunday's All-Ireland qualifier at Healy Park.

Mickey Harte's side, reduced to 14 when Mattie Donnelly was sent-off, had fought back from four points down to lead early in the second half.

But Armagh produced a dominant spell, outplaying Tyrone all over the park, to book their place in the third round.

It was an early and surprising exit for Division One side Tyrone, but an enormous boost for Division Three outfit Armagh and their manager Paul Grimley.

They had struggled against Tyrone in recent seasons and the Red Hands were definite favourites to progress.

Right at the start of the match, there was a melee with players involved in pushing and shoving, and it resulted in Armagh's Aiden Forker and Donnelly of Tyrone picking up yellow cards.

Armagh built up a 0-7 to 0-3 lead with Tony Kernan landing four points, Jamie Clarke two and Stephen Harold the other.

Two Sean Cavanagh frees reduced the gap to two points by half-time but, by that stage, Tyrone were down to 14 men as Donnelly was sent-off for a second yellow card offence.

That was a big blow to Harte's men as Donnelly had been a key performer for them this year.

Tyrone got the first three points of the second half to go one up, but Armagh then stormed back.

They rattled off six points while Tyrone's only other scores were two Darren McCurry frees.

Armagh's Ciaran McKeever got a black card near the end, but it did not matter as the Orchard County won by three points.