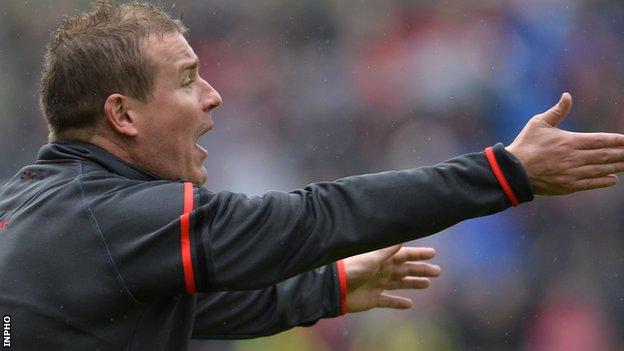 James McCartan has quit as Down boss a fortnight after the All-Ireland qualifier defeat by Kildare.

McCartan took the Mourne side to the All-Ireland final in 2010 in his first season in charge.

It proved to the highlight of his reign although progress was hindered by emigration and injuries.

"It is time for a new voice and I wish the next manager well. He and the players who wear the red and black will always have my support," said McCartan.

Down were beaten in a replay by Tyrone in this year's Ulster SFC preliminary round and made their All-Ireland exit in the second round of qualifiers.

McCartan, who won two All-Ireland titles and two All Stars as a player, managed Ballinderry and Queen's University before replacing Ross Carr in the Mourne hotseat in September 2009.

An amazing first campaign culminated in a surprise appearance in the All-Ireland decider with Cork prevailing 0-16 to 0-15.

"It has been a pleasure and a privilege to hold this position since my appointment in 2009, just as it was to represent my county on the field of play," added McCartan.

"It was my intention to do my very best in trying to bring Down back to the top and while we did not achieve the titles and silverware that we craved, it was not for the want of trying.

"We came very close to claiming the greatest prize in 2010 and there were plenty of good days. I have enjoyed the challenge.

"It was important for me to have a Down team playing regularly in Croke Park and 2014 was the only year of the five in which this didn't happen.

"I wish to thank all those who featured in the Down jersey during the past five seasons and those great people who were part of the management and backroom team. They made my job much easier and all the more worthwhile."

"Personally gutted that James has stepped down as Down manager," said Coulter on Twitter.

"Knew it was coming but still gutted. Can't speak highly enough of him."