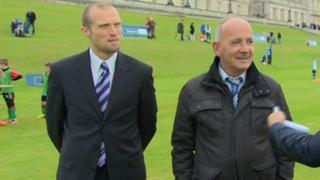 Linfield manager Warren Feeney and Cliftonville boss Tommy Breslin are looking forward to the start of the Irish Premiership season on Saturday.

Feeney will hope his Blues team can replace Cliftonville as champions in his first campaign in charge of the Windsor Park club.

Linfield open against Portadown while the Reds start their title defence with a home game against Glentoran.