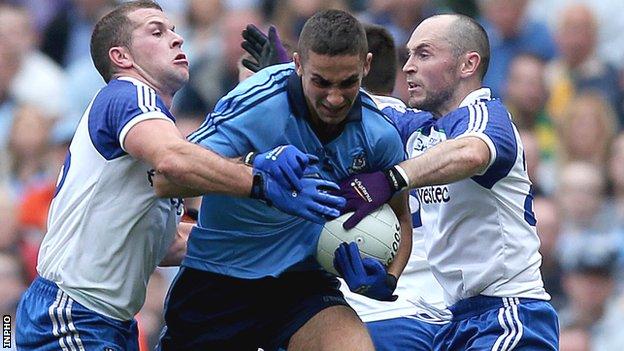 Monaghan were crushed 2-22 to 0-11 as All-Ireland champions Dublin eased to a quarter-final win at Croke Park.

Dublin stepped on the gas in the last 10 minutes of the first half, hitting 2-5 and conceding just two points to take a firm grip on the contest.

Diarmuid Connolly and Bernard Brogan netted for the Dubs, who went in 2-8 to 0-5 ahead at the break.

Dublin surged clear in the second half against a tiring Monaghan side to set up a semi-final against Donegal.

Bernard Brogan and Kieran Hughes swapped early points from frees, and the game was 20 minutes old before it produced its first score from play, a gem from Monaghan's All-Star attacker Conor McManus.

Dublin seized control before half-time although Monaghan did pull back scores from Dick Clerkin and Rory Beggan.

A confident Dublin side turned up the intensity against a visibly tiring challenger in the early stages of the second half.

Kevin McManamon and Paul Flynn got in on the act with points, and two more from Alan Brogan opened up a 13 points lead with 40 minutes on the clock.

They could have had more goals, but substitute Cormac Costello dragged his shot wide, and Connolly also drilled an effort the wrong side of a post.

McManus and Clerkin pulled back scores, but there was no way back for Monaghan.

Connolly could have had a hat-trick, another bad miss giving Stephen Cluxton the opportunity to slot over a '45, making it 2-17 to 0-10 with 10 minutes to play.

Dean Rock came off the bench to hit a couple of points, and Brogan brought his tally to 1-7, while McManus fired over his seventh point at the other end to salvage some pride.