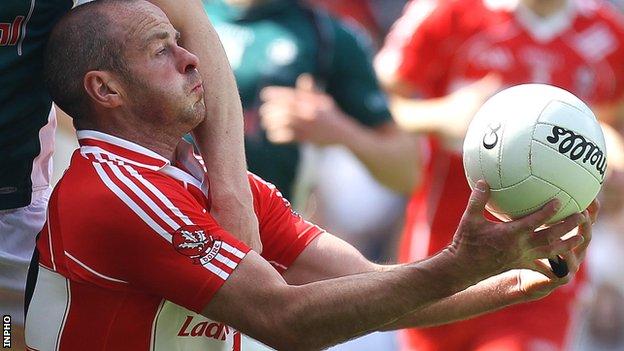 The family of former Derry captain Kevin McCloy say his condition is "continuing to improve" after the player collapsed during a club match.

The 35-year-old, who fell ill while captaining Lavey against Magherafelt at Owenbeg on Wednesday night, is stable in Altnagelvin Hospital.

Paramedics and an ambulance on site treated McCloy on the pitch around ten minutes into the game.

A further ambulance was called and took him to hospital.

"Kevin's wife Cathy and family are very thankful and happy for the care and attention he has been receiving," added the McCloy family.

"The family is very thankful for those who attended to Kevin on Wednesday night at Owenbeg GAA grounds.

"We would also like to thank all those who have sent good wishes and prayers."

Speaking on BBC Radio Foyle on Thursday, Derry GAA chairperson John Keenan said a defibrillator had been used on McCloy after he collapsed.

"Ten minutes into the game, Kevin kicked the ball and fell to the ground, and almost immediately it became apparent something very serious had gone wrong," he said.