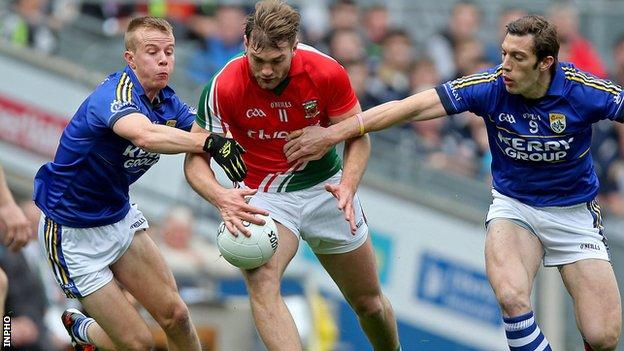 Kerry produced a late comeback to earn a 1-16 to 1-16 draw with 14-man Mayo in a thrilling All-Ireland SFC semi-final at Croke Park on Sunday.

Mayo's Lee Keegan was red-carded two minutes before the break and Kerry went in 0-9 to 0-5 ahead at half-time.

The Connaught men clawed their way back and moved in front thanks to Cillian O'Connor's penalty on 59 minutes.

Kerry hit back with a James O'Donoghue goal and Kieran O'Leary fired over in injury-time to set up a replay.

That will take place next Saturday in Limerick with the second semi-final between Dublin and Donegal the following day.

Keegan was shown a straight red card for kicking out at Johnny Buckley but Mayo rallied after the interval and they pulled level after 45 minutes.

It was still all-square when O'Connor blasted into the net after Donal Vaughan was hauled down in the penalty area.

Mayo led by four heading into added time but Kieran Donaghy set up O'Donoghue to fire in from close and there was just a point between the sides.

Substitute O'Leary slotted over the equaliser in a frantic finale to ensure the sides will meet again next weekend.