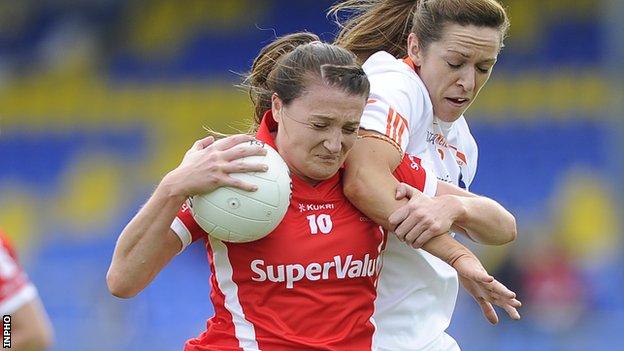 Armagh suffered a 5-16 to 2-11 defeat at the hands of holders Cork in Saturday's All-Ireland Senior Ladies Football semi-final in Longford.

Caroline O'Hanlon netted as Armagh led early on before goals from Ciara O'Sullivan and Grace Kearney helped Cork to a 2-6 to 1-4 interval lead.

Fermanagh beat Roscommon 7-12 to 3-12 in the intermediate semi-final.

Sisters Caroline and Sharon Little were very much to the fore in this victory, with Sharon bagging 3-3 from play, while Caroline scored 2-5, including a penalty goal in a gripping encounter.

Fermanagh now advance to an All-Ireland final against Down on 28 September at Croke Park.

Just a point separated Cork and Armagh in Birr 12 months ago, but Cork firmly showed why they are top-guns at senior level, with this comfortable victory.

Little separated the sides early on, and indeed Armagh led by 1-2 to 0-2 after 10 minutes, with Northern Ireland netball International O'Hanlon claiming all of their opening scores, including a penalty goal.

Armagh still held the lead midway through the half, but once O'Sullivan netted a 17th minute goal to put Cork in front, the holders of eight of the last nine All-Ireland titles stayed ahead until the end.

Despite the efforts of Fionnuala McKenna, Sinead McCleary, O'Hanlon and others, Armagh couldn't keep Cork at bay.

Armagh finished strongly, registering 1-3 without reply in the final four minutes, including a goal from substitute Mackle.