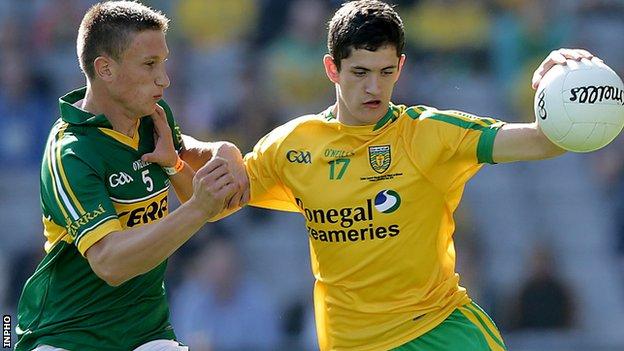 Donegal suffered a 0-17 to 1-10 defeat by Kerry in Sunday's All-Ireland minor football final at Croke Park.

Caolan McGonagle's superb free gave Donegal an early lead but Kerry were the better team in the first half and led 0-8 to 0-6 at the break.

Kerry increased the gap to five points but Jamie Brennan scored a 51st minute goal and a Lorcan Connor free left a just point between the sides.

It was Donegal's first appearance in an All-Ireland minor decider and they kept in touch in the opening 30 minutes despite Kerry's superiority.

The impressive Killian Spillane fired over a classy first-half point for the Munster teenagers before Kerry made their dominance count on the restart.

Brennan was denied a goal by the woodwork after 44 minutes but he gave Donegal hope with a cracking shot into the top corner.

Donegal captain Niall Harley reduced the gap to two and the Ulster side went close to moving in front when Connor's strike was saved by keeper Shane Ryan.

Connor slotted over to leave it 0-14 to 1-10 but Kerry regained control and Spillane sealed Kerry's first minor success since 1994 with a late point.