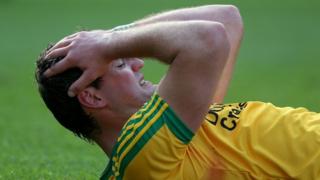 Donegal will rue 'final that got away'

Martin McHugh says the Donegal management and players will forever view the All-Ireland Final defeat as 'one that got away' against a not-great Kerry team.

"You can see that Paul has his hands over his eyes [because of the sun]. I think he just didn't see Kieran Donaghy and got caught out.

"Things just didn't go for Donegal. Even Paul Durcan when he was practising kicking balls before the match, a ball went off the side of his foot and it hit a young girl in the crowd.

"She had to get treatment and he came over to see if she was OK."