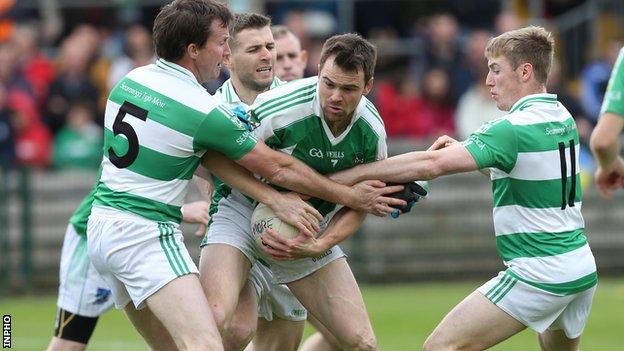 Roslea secured a fourth Fermanagh club title in five years after a 3-4 to 1-5 victory over Teemore in Sunday's final.

Seamus Quigley palmed in an early goal as Roslea made a strong start at Brewster Park but Teemore fought back and Eoin McManus netted on 23 minutes.

Roslea led 1-3 to 1-2 at the break and Sean Quigley blasted home their second goal but they were reduced to 14 men after Niall Cosgrove's red card.

Roslea were firm favourites to retain the Erne club crown against a Teemore side which was relegated to Division Two in this year's county league.

Conor Quigley set up his brother Seamus to score the opening goal after 10 minutes.

Seamus Quigley added two points to his goal in the first half, the same tally as Teemore opponent McManus.

There was a touch of fortune with his goal as his long ball bounced in front of the keeper and into the Roslea net.

Roslea made the perfect start to the second half as Sean Quigley fired in on 32 minutes after good work from Cosgrove.

Teemore closed the gap courtesy of two McManus points and another from Declan Reilly.

Cosgrove was dismissed in the 50th minute after disputing a decision but Roslea responded with their third goal seven minutes later.

Conor Mulligan fired a long ball forward and it came off the unfortunate McDonald and into his own net.