Sports Minister Carál Ní Chuilín has said that the £61.4m of government funding for the stalled Casement Park stadium redevelopment is not in danger of being lost to the project.

On Monday, the High Court ruled that Northern Ireland's environment minister had acted unlawfully in granting the project planning permission.

Another ruling is now expected on Thursday following further submissions.

"The £61.4m is ring-fenced and protected," said the sports minister.

"It's part of a decision that was made by the Executive as far back as March 2011.

"All the conditionality of that decision was that the funding for the three stadia [Casement, Kingspan and Windsor Park] would be protected for the duration [of the projects]."

Monday's announcement saw High Court judge Mr Justice Horner upholding a number of complaints from local residents who launched a legal challenge against the plan to build a new 38,000 all-seater stadium at the venue. 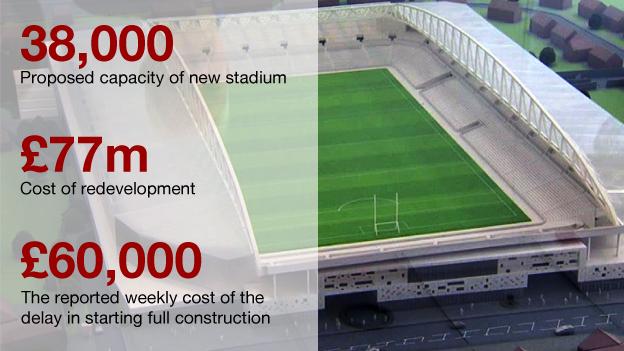 Justice Horner held that the decision-making process was "fundamentally flawed".

He identified failures in the environmental impact assessment of the increased facilities and an unrealistic reliance by the Department of the Environment (DOE) on an existing 32,600 capacity as a baseline for the project.

With far fewer spectators normally attending matches at the current ground, the judge also found that the effect of bigger crowds on the surrounding roads network had not been properly examined.

However, he did not quash the minister's decision.

Instead, lawyers for the DoE, the GAA and a residents group who mounted the legal challenge were asked to make further submissions on appropriate remedies.

The court was scheduled to reconvene on Wednesday following these submissions but this has now been put back until 14:30 GMT on Thursday.

In an interview with BBC Northern Ireland following Wednesday's adjournment, Miss Ní Chuilín said she was determined to see the Casement Park upgrade through to its conclusion.

Asked about a comment from the Department of Environment's counsel during the 13-day judicial review that the failure of the current planning application could lead to the £61.4m of government funding returning to the exchequer, the sports minister replied: "Maybe he wasn't completely au fait with government accountability.

"He was making an argument. I'm dealing with the facts. In the cold light of day, I have a decision which gives me the authority and the wherewithal to ring-fence and protect these monies."

Miss Ní Chuilín also said that she expects the GAA to submit a new planning application in the New Year if the current proposal is quashed on Thursday.

"I certainly will back the call for the redevelopment of Casement Park. The money for Casement Park is still within my budget.

"I want to ensure that Casement Park and the GAA have the facilities that they deserve.

"Fair play to Ravenhill/Kingspan. They have got a facility which is excellent and rugby are enjoying great facilities and rightly so.

"Windsor Park is practically completed and we have now started on the second part for soccer which is sub-regional.

"And Casement Park has tumbleweed. That's not good enough and it's not going to happen on my watch.

"I'm going to support them in the redevelopment of a new stadium in the new year if that's what they want to do."

The GAA's provincial body, the Ulster Council, said a 38,000 capacity was needed for the staging of Ulster Senior football finals and All-Ireland quarter-finals.

Speaking after Monday's hearing, Tom Daly, chairman of the Casement Park project board, ruled out a "compromise" 25,000 capacity stadium which has been suggested by the residents group.

Ireland's hopes of hosting the 2023 Rugby World Cup could also be affected by the Casement Park decision as it has been regarded as a key Northern Ireland component of the tournament bid.