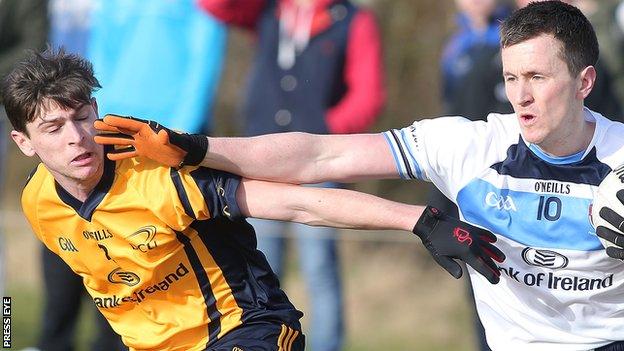 Ulster University Jordanstown's Sigerson Cup hopes were ended by a 3-10 to 0-10 defeat by Dublin City University on Wednesday.

But there will be some Ulster representation in the last eight as St Mary's beat NUI Galway 1-7 to 0-7.

The Belfast College will now face DCU in the quarter-finals.

DCU scored all the goals in their contest at Jordanstown to send last year's beaten finalists out of the competition.

Jordanstown's made an encouraging start but were guilty of seven wides in the opening 25 minutes.

Goals in the second quarter from Roscommon's Enda Smith and Sligoman Murphy helped DCU to a 2-5 to 0-4 interval lead.

Smith scored again after the break as DCU advanced to the quarter-finals.

The Dublin university are hoping to win the inter-colleges competition for the fourth time in 10 years.

They went behind in the game at Jordanstown when Richie Donnelly snapped up the opening score.

But scores from Dublin's Conor McHugh and Niall Murphy gave DCU a 0-2 to 0-1 lead after 13 minutes.

Donegal's Paddy McBrearty and Tyrone's Ronan O'Neill claimed the last two points of the half for UUJ but they trailed by seven at the break.

McBrearty, Stephen Sheridan and Caolan Mooney recorded scores, as the deficit was narrowed to five points with 15 minutes remaining.

Rory Connor and Mayo's Cillian O'Connor added to the UUJ tally, but they could not get closer than four points.

DCU finished strongly, with an unanswered 1-2, including Smith's second goal to help them to a nine-point win.