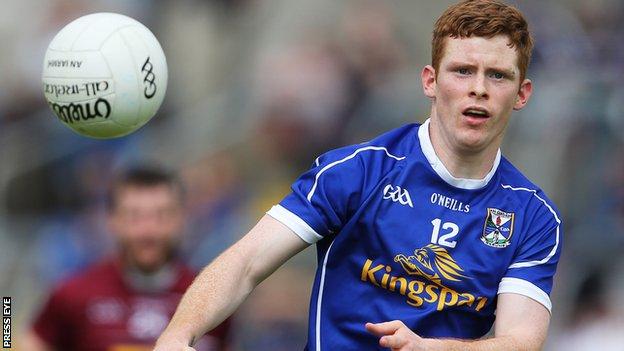 Donal Kingston netted for the hosts at O'Moore Park before the Ulster side scored seven points without reply.

Kingston's second goal made it 2-3 to 0-9 at the break and Laois moved a point ahead early in the second.

But they failed to score for 30 minutes and Cavan surged clear, with James McEnroe firing over two points as the Ulster side secured a first league win.

Cavan started their campaign by drawing with Roscommon last weekend and this victory takes them top of the standings on points difference.

Laois made a blistering start with Kingston hitting the back of the net after just three minutes before Colm Begley added a point.

McDermott started the comeback and he slotted over another two times in the seven-point run which also saw scores from Paul Smith, Damien O'Reilly, Dara McVeety and Martin Reilly.

Kingston closed the gap to a single point and he netted a second goal after Damien Reilly's point for the visitors.

McDermott was on target again to ensure the sides went in level in Portlaoise.

Kingston and Ross Munnelly registered points on the restart to edge Laois in front but Cavan seized control and rattled off eight straight points to win the game.

Munnelly scored the final point of the game in injury-time but it proved to be in vain as Cavan ran out five-point victors.