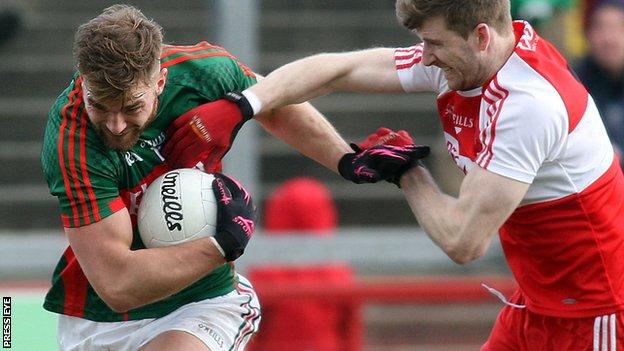 The Oak Leafers staged a second-half revival to get level but the defeat leaves them deep in relegation trouble.

Mark Ronaldson fisted in the only goal of the first half for Mayo, who led 1-7 to 0-6 at the interval.

James Kielt was instrumental as Derry landed five points in a row but Michael Sweeney netted a vital score before the hosts got a late goal themselves.

It leaves Derry on two points from their four matches and their remaining fixtures see them travel to Monaghan and Dublin before finishing at home to Cork.

"We asked the lads for a big performance and we got it," said Derry boss Brian McIver.

"We will be doing the same next week in Clones.

"We battled superbly but just did not press on.

"When we got level, Mayo won the next two kick-outs. They had the ability to win the crucial balls at crucial stages.

"James Kielt got a black card when we felt the free should have gone to us and that made a big difference."