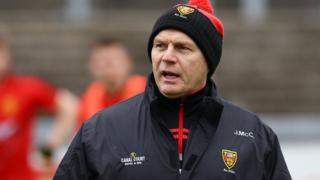 Down manager Jim McCorry says Brendan McArdle's sending off late in the first half of the Division 2 Football League final by Roscommon was a big factor in the outcome.

McArdle was controversially dismissed for two yellow card and Roscommon went on to clinch a comprehensive 1-17 to 0-15 win at Croke Park.

The Down boss also revealed that Mark Poland was unable to line out after picking up an eye injury in the pre-match warm-up when he was hit by a ball.

Champions League build-up & return of fans survey - are you going to a game?