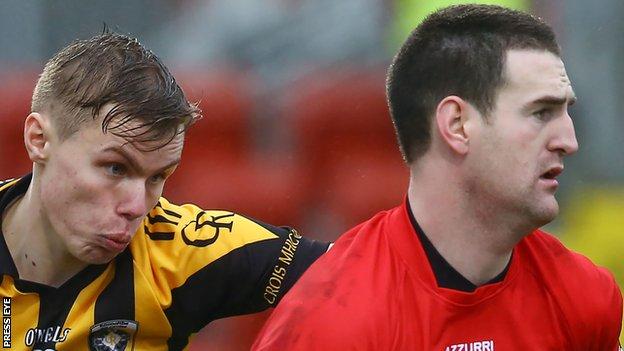 Ten-times winners Crossmaglen Rangers are back in the Ulster Club Championship final after beating Kilcoo 0-12 to 0-8 at Pairc Esler on Sunday.

Down title holders Kilcoo had led early on but a run of seven points without reply saw Cross take control.

Crossmaglen will play Scotstown of Monaghan in the final on 29 November.

It will be an 11th provincial decider for Cross, the Armagh champions having won all of the previous 10.

Scotstown will be making their first appearance in the final for 26 years.

Kilcoo, who have never won the Ulster Championship, made the better start to Sunday's clash in Newry, carving out a 0-3 to 0-1 advantage through two O'Hanlon frees and a score from play by Ryan Johnston.

The Down side's full-forward pairing of Jerome Johnston and Conor Laverty seemed to be causing problems for the Cross defence.

But Rangers got points through Paul Hughes and Tony Kernan to be level at three apiece at half-time.

Cross tagged on another five points in a row to go 0-8 to 0-3 up while Rico Kelly hit the post with a goal chance.

O'Hanlon added four to his tally in the second period while Kilcoo's other point was scored by Martin Devlin.

But the Kernan brothers, Kyle Carragher and Kelly were all on target as Cross closed out the victory.

Crossmaglen's Stephen Kernan picked up a late black card but it had no bearing on the outcome.

Crossmaglen joint manager Oisin McConville: "We did not start very well. We owned the ball for a 20-minute spell but could not get it over the bar.

"We were better in the second half and it is great to be back in this final after beating Kilcoo, a side for whom we have a healthy respect."