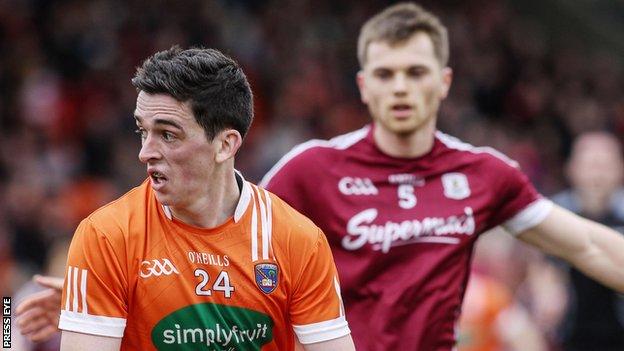 Tyrone secured promotion from Football League Division Two by beating Meath 1-17 to 1-11 at Navan on Sunday.

A Ronan O'Neill goal helped Tyrone to a 1-10 to 1-6 half-time lead and the Red Hands made it five wins out of five.

Derry scored five goals against Laois at Portlaoise, but the game ended in a draw, 1-22 to 5-10.

Cummins fisted the ball into the net in the seventh minute of injury time to earn his side an unlikely draw against Kieran McGeeney's outfit.

The sides were level at the end of an entertaining first half on a score of 0-9 each, Stefan Campbell having scored seven points for the Orchard county.

Ethan Rafferty was sent-off for two yellow cards early in the second half, but a 52nd-minute Campbell penalty took his side into a 1-14 to 0-10 lead, an advantage which was extended to 1-15 to 0-10 by the 57th-minute mark.

Captain Aidan Forker became the second Armagh player to be dismissed and Galway came with a late charge, Patrick Morrison saving on the line for Armagh, before Cummins found the net with the final action of the game. Campbell contributed a total of 1-9.

Defending a 100% record to date in the competition, Tyrone suffered an early setback when Michael Newman found the net with a superb finish in the fourth minute, but O'Neill's goal on 10 minutes took the scores level at 1-4 each.

Sean Cavanagh had a chance to score a further goal, before Tyrone went on a run of six unanswered points, Meath replying with two of their own before the interval.

Newman landed three further points in the second half to take his personal tally to 1-7, while Peter Harte added three scores for his side as Tyrone led 1-13 to 1-10.

Two Cavanagh frees and points from Mattie Donnelly and Hugh Pat McGeary ensured a comfortable winning margin for Mickey Harte's men, who are promoted back to the top flight at the first time of asking following their relegation last year.

With two sets of fixtures remaining, Tyrone's maximum 10 points puts them four ahead of both Cavan and Galway, who meet in the final round of games on 3 April.

That means that the Red Hands are guaranteed at least second spot in Division Two which will be enough to secure promotion.

Paul Kingston's goal after just 29 seconds gave Laois the perfect start against Derry but play was delayed for a lengthy period while Kieran Lillis received treatment for an ankle injury.

Goals by Daniel Heavron and Shane Heavron kept the Oak Leafers in the game and they trailed by a single point, 2-6 to 1-10, at the break.

Christopher Bradley twice smashed the ball into the net in the second half and a goal by second-half substitute Mark Lynch and a late James Kielt point ensured a share of the spoils for their side.