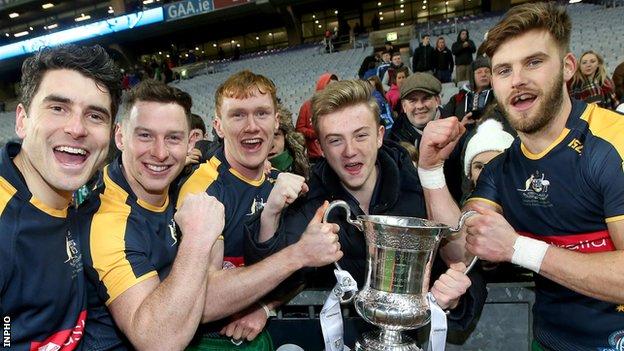 The GAA has confirmed the return of the two-match format for the International Rules series between Ireland and Australia on 11 and 18 November, 2017.

Australia will host the games which are played under a compromise of Gaelic football and Aussie Rules regulations.

In 2014 there was a one-off Test in Perth and in 2015 a single fixture was staged at Croke Park in Dublin.

The venues for next year's matches in Australia have yet to be decided and Ireland will host two games in 2019.

In the two-match series, the aggregate scores determine the overall winners of the Cormac McAnallen Trophy.

Former Armagh boss Joe Kernan will continue as manager of the Ireland team for the matches on 11 and 18 November, 2017.

"We believe the two-game series is a logical development after the success of the last two single games series, given the distances involved and the potential to generate even more momentum around the games," said GAA president Aogán Ó Fearghail.

"We look forward to renewing rivalries with the best the AFL has to offer."

The GAA has also announced that, following trials in colleges games, the 'mark' will be introduced to Gaelic football in 2017.