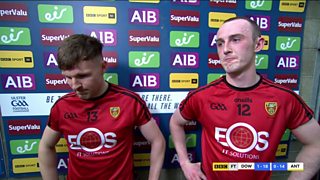 O'Hare and Millar reflect on Down's win over Antrim

Down forwards Donal O'Hare and Shay Millar say they must now focus on their next game after beating Antrim in their Ulster quarter-final.

Down will play the winners of the remaining quarter-final between Derry and Donegal at Celtic Park.

"Maybe we didn't do as well as we expected but we're over the line today so we'll move on and focus on the next game, Derry and Donegal, and see who it is."