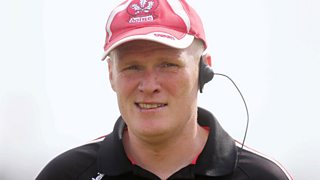 Derry manager Damian McErlain says his team's poor shooting prevented them ever getting real momentum in the Celtic Park contest against Donegal.

"If we had taken our scores, we would have given ourselves a chance," McErlain told BBC Sport Northern Ireland after Donegal's 2-16 to 0-16 Ulster quarter-final win.

"Donegal always tagged on that point which kept them beyond arm's length. It was frustrating because the boys put in a big effort."