Shooting has been an Olympic sport since the first modern games in 1896 and has a history of providing intrigue and drama.

And with a vast array of disciplines, encompassing various guns, targets and distances, maybe you should pull the trigger and give shooting a try? 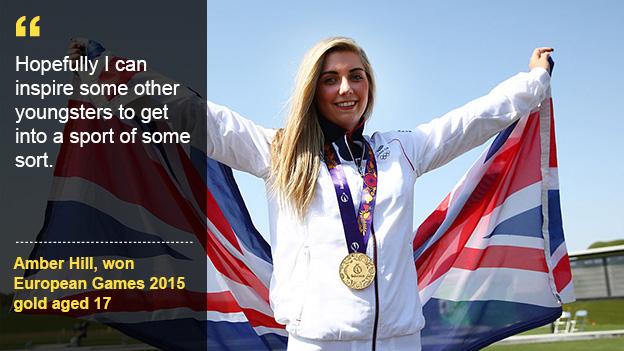 Amber Hill won gold for England at the Commonwealth Games aged just 16, and followed that with European Championships success in 2015.

Shooting is a tense sport that requires immense reserves of skill, concentration and nerve. Strength, stamina, hand-eye coordination and fine motor skills are all improved by taking part.

As shooting events rely on mental power, people of all ages can compete against each other on equal terms - the oldest Olympic champion was Sweden's Oscar Swahn, who won gold in Stockholm, 1912, aged 64!

British Shooting's find a club section is the best place to start, while you can also find guidance to help you decide between pistol, rifle and shotgun - the three Olympic disciplines.

A gun for everybody

British Shooting supports the This Girl Can campaign, and a number of all-girl clubs throughout Britain.

Femme Fatales calls for women to not "use being a girl as an excuse, use it as ammunition", while The Shotgun and Chelsea Bun Club combine the twin principles of shooting and cake to appeal to beginners!

According to British Shooting, disabled people currently make up 25% of recreational shooters - a number that they are committed to increasing further.

At the 1906 unofficial Athens Olympics, athletes competed in pistol duelling, shooting at mannequins in frock coats.

The Great Britain Academy Programme was developed in 2014 to ensure that the there was a clear talent pathway for skilled young shooters. But first you need to pick up a gun!

Due to the wide range of guns available for use, there is no real age limit on when people can start shooting.

And, as strength isn't important, if you're good enough you'll be able to compete at whatever level your skill warrants!

British Shooting describe volunteers as "critical" to the sport, and have an abundance of information on how to get involved on their website.

The pathway into coaching may lead through volunteering, although you can apply for work experience with the governing body here. Contact your local club to find out about any coaching roles they have available.

Are you inspired to try shooting? Or maybe you are a keen enthusiast already? Get in touch and tell us your story by tweeting us on @bbcgetinspired, visiting us on Facebook or email us on getinspired@bbc.co.uk.